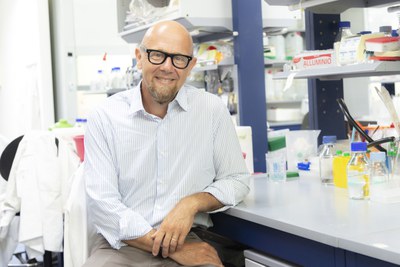 Alberto Auricchio, MD is Professor of Medical Genetics at the Department of Advanced Biomedicine, University in Naples “Federico II”, and Coordinator of the Molecular Therapy Program at Telethon Institute of Genetics and Medicine (TIGEM) in Pozzuoli (NA), Italy. His research is focused on gene therapy of retinal and metabolic diseases using adeno-associated viral vectors. His group has contributed to the phase I/II clinical trial of Luxturna, the first approved gene therapy drug for an ocular disease, and to the development of gene therapy for mucopolysaccharidosis VI in an ongoing phase I/II trial.
Prof. Auricchio is co-author of more than 140 peer-reviewed publications in international scientific journals and inventor of several international patents on the use of viral vectors for gene therapy. Prof. Auricchio is founder, shareholder and consultant of InnovaVector, a CMO for production of AAV vectors, and AAVantgarde Bio, a spin-off interested in developing novel gene therapies for blindness. He is a member on the editorial boards of various journals and of the Executive Board of the European Society of Cell and Gene Therapy.
Prof. Auricchio has received the Outstanding New Investigator Award of the American Society of Gene Therapy and the International Prize for Scientific Research “Arrigo Recordati”. Prof. Auricchio is a multi-grantee of the European Research Council.

Gene therapy and genome editing in the retina

Inherited retinal diseases (IRD) are a major cause of blindness worldwide mostly due to mutations in genes expressed in retinal photoreceptor cells (PR). Recently, our lab has contributed the development of safe and effective gene therapy using adeno-associated viral vectors (AAV). This has led to the approval of the first gene therapy product for an ocular disease (Luxturna) which treats patients with a rare form of inherited childhood blindness. However, several genes expressed in PR and involved in IRD are larger in size than the carrying capacities of AAV vectors. Our goal is to overcome the challenge of transferring large genes to PR in order to develop therapies for common IRDs. Retinal gene therapy has limited applicability in the treatment of dominant IRDs. This is because these diseases are due to gain-of-function mutations for which traditional gene replacement is ineffective. We are evaluating several AAV- and CRISPR-Cas9- based approaches that allow simultaneous blocking of the mutant allele and replacement with a wild type copy. The results from these projects may provide novel treatment options for common severe blinding conditions.

Mucopolysaccharidosis VI (MPS VI) is caused by deficient arylsulfatase B (ARSB) activity, resulting in lysosomal storage of glycosaminoglycans (GAGs). MPS VI is characterized by dysostosis multiplex, organomegaly, corneal clouding, and heart valve thickening without central nervous system involvement. Enzyme replacement therapy for MPS VI has limited efficacy and requires multiple administrations of costly enzymes. Gene transfer to a factory organ like the liver may provide a life-time source of secreted ARSB. We have shown that single intravascular administration of adeno-associated viral vectors (AAV) 2/8-TBG-ARSB in MPS VI is both safe and effective in animal models and, more recently in humans, with therapeutic levels of ARSB produced by liver that are stable for several years. The long-term outcomes of gene therapy in patients as well as AAV vector dose-refining are in progress. Patients under 4 years of age are currently excluded from trials because potential hepatocyte proliferation may result in AAV episomal DNA dilution and loss of transgene expression. We are evaluating an AAV- and CRISPR Cas9-based approach that integrates the ARSB coding sequence at the highly transcribed albumin locus to obtain stable therapeutic levels of ARSB following newborn administration in animal models. This could be applied to other models of lysosomal storage diseases targetable by liver gene therapy. Alberto Auricchio is the Head of the Retinal Phenotyping Unit, providing a wide range of techniques and protocols to phenotype / characterize both the mouse retina and human retinal organoids. These investigations are crucial for the evaluation of novel therapies.

Our goal is to develop novel in vivo gene therapy and genome editing strategies for a wide range of inherited blindness and metabolic diseases.