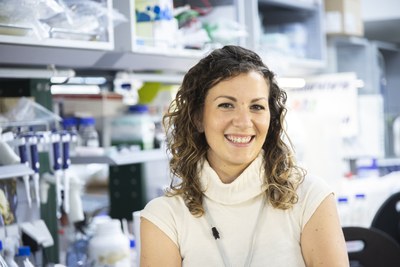 Ivana Trapani got a Bachelor’s degree in Biotechnology for Healthcare in 2007, followed by a Master’s degree in Pharmaceutical Biotechnology in 2009. In 2010, she entered the PhD program in Molecular Medicine of the European School of Molecular Medicine (SEMM), at the Telethon Institute of Genetics and Medicine (TIGEM), after which she remained at TIGEM to continue her studies as a postdoctoral researcher. Dr. Ivana Trapani’s main research interest over the last few years has been the development of gene therapy approaches for the treatment of inherited forms of blindness. In particular, her studies led to the identification of different strategies to overcome one of the main limitations of the virus that is most commonly used as a vehicle for retinal gene therapy, the adeno-associated virus (AAV), unable to carry genes longer than 5 kb.

Inherited retinal diseases (IRDs) are a major cause of blindness worldwide. Gene therapy represents an attractive therapeutic option for treatment of these diseases, and vectors based on adeno-associated viruses (AAVs) are considered the gold-standard for retinal cells transduction. As a confirmation of this, the first gene therapy product to receive a landmark market authorization in both the USA and Europe for treatment of a common form of IRD is based on an AAV vector. However, many tissue- and disease-related challenges in the field of retinal gene therapy are still unsolved, including the possibility to efficiently transfer large genes (>5 kb) via AAVs. Therefore, strategies to overcome such hurdles are being developed at a rapid pace.

Our lab was set up in January 2021, we plan to focus our attention on developing AAV-based approaches which can tackle retinal diseases at multiple levels. We will explore novel gene replacement and genome editing approaches, which overcome the limitations of the existing ones, to directly provide a functional copy of diseased genes. In parallel, we will develop gene-independent gene therapy approaches to target key pathways which are altered in IRDs. We will use cutting-edge in vitro models, three-dimensional retinal organoids, and in vivo models. While our studies will be focused on testing these new approaches in common forms of IRDs due to mutations in large genes, such as Retinitis Pigmentosa and Stargardt disease, the overall goal of our project is to provide insights to treat additional common inherited and acquired retinal diseases.

Having the possibility to help people, by finding solutions to diseases which are still untreatable, motivates me incredibly and makes me feel that my efforts are focused in a positive direction.