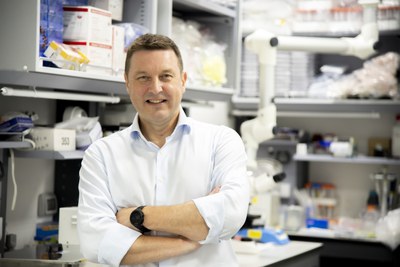 Roman Polishchuk received his Master’s Degree in Biology in 1993 from the Ivanovo State University (Ivanovo, Russia) and his PhD in Cell and Developmental Biology from the Russian State Medical University (Moscow, Russia) in 1995. He was a postdoctoral researcher with Drs. Alberto Luini and Alexander Mironov at the Mario Negri Sud Research Institute (Italy). In 2000, he joined the lab of Jennifer Lippincott-Schwartz at the NICHD (NIH, USA) and returned to Mario Negri Sud Institute to start his own lab in 2002. During his early career he made important contributions to the characterization of transport mechanisms in different segments of the secretory and endocytic systems. Gradually, his work shifted focus towards the molecular mechanisms coordinating intracellular membrane trafficking, ion transport, and cell polarity in genetic disorders and cancer. Since 2009, Roman Polishchuk has had a Laboratory Head position at TIGEM, where he also acts as Supervisor of the Advanced Microscopy and Imaging Core. His lab has developed integrated experimental approaches to study the cell biology of inherited disorders of copper metabolism. He has also been among the pioneers of groundbreaking CLEM technology, which combines the advantages of live cell imaging and electron microscopy. He is the author of over 120 publications in international scientific journals. His research has been funded by Telethon, AIRC, Italian Ministries of Research and Health, and by the European Union.

Over the last few decades, studies in my lab have made substantial contributions to the understanding of cellular trafficking pathways at the morpho-functional level. This has provided us with a solid temporal and topographical framework for the study of the molecular machineries implicated in membrane sorting and trafficking processes. Therefore, our goal is to identify and characterize new molecular pathways operating in sorting and trafficking events under pathological conditions with a specific focus on genetic disorders and cancer.

Currently, the lab’s researchers are focused on the role of membrane trafficking in copper homeostasis and on the interplay between this process and ion transport, quality control and the cell polarity mechanisms which participate in the maintenance of copper balance in the body. In recent years, it has become clear that several genetic disorders of copper metabolism are caused by mutations that affect either the expression of copper transporters or their ability to reach the specific cellular sites, where they would be expected to execute their functions.
Among these transporters, ATP7A and ATP7B, also known as copper (Cu) ATPases, represent proteins with key roles in regulating copper levels in the body. Mutations do not allow aberrant Cu ATPases to be efficiently expressed or to move properly through the secretory pathway towards the specific sites in which Cu transport is needed, therefore, resulting in either ATP7A-dependent Cu deficiency (Menkes disease) or ATP7B-dependent Cu toxicosis (Wilson disease). Unfortunately, the mechanisms that might be used to compensate the loss of ATP7A/B function remain poorly understood. The aim of our studies is to identify such mechanisms and explore them for normalization of Cu homeostasis and for correction of trafficking of aberrant ATP7A/B variants. In addition to genetic disorders, recent studies suggest that Cu ATPases play an important role in oncogenesis and resistance of tumors to chemotherapy. As a consequence, tumor-specific suppression of ATP7A/B has emerged as an attractive strategy to counteract tumor growth and metastasis. In this context, our studies of the mechanisms that drive ATP7A/B dysfunction in genetic disorders have opened a new research line that is focused on how to use these mechanisms to combat cancer.

Roman Polishchuck is the head of the Advanced Microscopy and Imaging Facility, providing technical assistance, expertise, and qualitative and quantitative evaluation of microscopy data for research projects at TIGEM.

I am a Cell Biologist by training and I believe that moving to the Rare Disease Field helped me to learn how cellular mechanisms adapt to pathological conditions and prompted me to investigate how these mechanisms might be targeted to help patients.