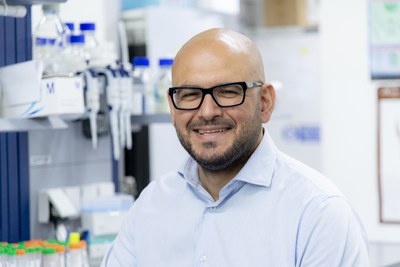 Pasquale Piccolo graduated in Medical Biotechnology in 2005 from University of Naples “Federico II” and then completed a Ph.D. in Human Genetics, also at the University of Naples in 2009. He then carried out post-doctoral research in Philip Ng’s lab at Baylor College of Medicine in Houston TX, here he became interested in liver-directed gene therapy with helper-dependent adenoviral vectors. He then returned to Italy, moving to TIGEM to work in Nicola Brunetti-Pierri’s lab. Here he investigated the role of transcription factors and microRNAs in the pathogenesis of liver disease related to α1-antitrypsin deficiency. Given the importance of this work, he was awarded with the α1-Antitrypsin Laurell's Training Award and the Gordon L. Snider Scholar Award. His research has also explored the potential of small molecules for the treatment of inherited diseases; he identified losartan as an effective treatment for the extracellular matrix deposition defect of Myhre syndrome, a rare connective tissue disease. Losartan has been shown to ameliorate ECM deposition in Myhre patients in a recent clinical trial. Since his appointment as an independent assistant investigator at TIGEM, his research has been focused on the development of novel liver-directed gene therapy approaches for genetic disorders with liver fibrosis.

Liver-directed gene therapy has undergone tremendous development over the last two decades. Recombinant adeno-associated vectors (AAV) are the vectors of choice for the treatment of inherited liver diseases and have recently achieved remarkable successes in clinical trials. Nevertheless, hepatocyte-directed gene therapy in fibrotic livers has as yet been poorly investigated and previous studies suggest that fibrosis could represent a barrier toward efficient gene transfer. Several physical and biological modifications induced by fibrosis such as accumulation of extracellular matrix, loss of sinusoid fenestration, and hepatocyte proliferation may hamper hepatocyte transduction by AAV vectors. In our lab, we investigate the impact of fibrosis on liver-directed gene therapy mediated by AAV vectors and seek to develop AAVs with improved hepatocyte transduction in fibrotic livers, by screening exiting AAV variants and by generating novel synthetic AAVs.

Several liver genetic disorders are characterized by advanced fibrosis or cirrhosis. Among these, Wilson Disease (WD) is the most frequent and is caused by mutations in ATP7B, encoding for a P-type copper transporting ATPase expressed in hepatocytes. WD represents an attractive target for liver-directed gene therapy. Nevertheless, several hurdles continue to obstruct the development of gene therapy for WD patients: full-length human ATP7B is too big to be accommodated in AAV vectors, the current vectors of choice for liver gene therapy. Moreover, liver pathology often arises in children and adolescents, gene transfer in a growing liver with episomal vectors like AAVs may result in progressive dilution of the transgene and loss of therapeutic effect. In our lab, we are working on novel AAV-based gene therapy approaches for WD. Our efforts are focused on the development of a liver-directed gene therapy for WD using intein-based dual AAV vector systems and AAV-based targeted integration of promoterless ATP7B. Understanding and treating rare genetic diseases is a wonderful journey and an extraordinary creative adventure that teaches us a lot about human life and health.