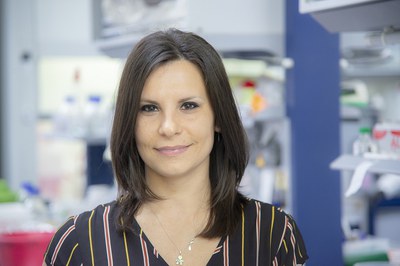 Nunzia Pastore graduated in Molecular Biology at the University of Naples “Federico II” and did her PhD in Life Sciences with the Open University (UK) and TIGEM. She then moved to Baylor College of Medicine in Houston (TX, USA) as a Postdoctoral fellow where she studied the role of transcription factors TFEB and TFE3 in immunity. She then became Assistant Professor focusing her research interests on transcriptional regulation in whole-body homeostasis, liver regeneration and cancer. In 2020, she moved back to TIGEM as Project Leader of the Translational Unit contributing to pre-clinical studies to test novel therapeutic and pharmacological therapies for genetic disorders. She also became Assistant Professor of Medical Genetics at the Department of Medical and Translational Science at University of Naples “Federico II”. In 2021, she became Head of the Generation of Animal Models (GAM) facility, helping TIGEM researchers with cryopreservation, resuscitation, and generation of Genetically Engineered Mouse Models (GEMM).

Her main research goal is to achieve a deep understanding of the biological mechanisms responsible for the liver pathology associated with Alpha-1-antitrypsin deficiency (AATD) and to translate her discoveries into novel therapeutic approaches for affected patients. Her research is supported by grants from the Associazione Italiana per la Ricerca sul Cancro (AIRC) and the Alpha-1 Foundation.

Tackling the biological complexity of AATD

Alpha-1-antitrypsin deficiency (AATD) is the most common genetic cause of liver disease in children and the most frequent genetic diagnosis for which children undergo liver transplantation. AAT is synthesized in the liver and released into the plasma where it is the most abundant circulating protease inhibitor. The most common genetic cause of AAT deficiency is a mutation that renders the AAT protein prone to form aggregates in liver cells, causing liver injury and increased risk of hepatocellular carcinoma (HCC). However, the severity of the liver damage among homozygotes is dependent on genetic and/or environmental modifiers. The only curative treatment available for hepatic failure or cirrhosis associated with AATD is liver transplantation.

Despite several studies that have contributed to better understanding the pathophysiology of AATD, major knowledge gaps still remain. Thus, in our lab we aim to tackle some of these gaps by focusing on aspects of liver pathology that have not yet been addressed or remain unclear. In particular, we are interested in identifying pathways responsible for altered liver metabolism and cancer development observed in later stages of the disease. We combine expression and imaging studies in cellular and murine models of the disease. Moreover, we take advantage of long-lived primary liver organoid technology and genome editing to understand how accumulation of the mutant AAT protein alters cell biology, differentiation, and metabolism and how dysregulation of these processes is involved in the pathogenesis of the disease. The final goal of our research efforts will be to evaluate possible exploitation or modulation of the identified pathways as therapeutic approaches for affected patients. Nunzia Pastore is the Head of the Generation of Model Animals Facility, providing specialized expertise and equipment for investigators working with mouse experimental models.

My research focuses on dissecting the molecular pathways underlying the pathology of liver disease associated with genetic disorders by combining 3D models and in vivo studies. TIGEM offers unique expertise and excellent resources to pursue my goal.