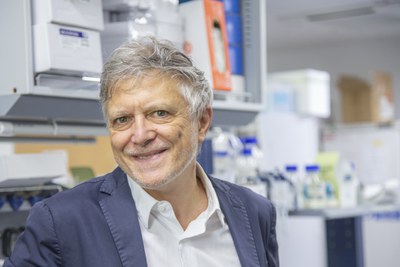 Coordinator of the Telethon Undiagnosed Program

Vincenzo Nigro obtained the Laurea cum laude in Medicine from the University of Naples “Federico II”. After a fellowship in General Pathology at the Second University of Naples, he became Associate Professor.  Vincenzo joined TIGEM in 2000 as Associate Investigator and, from 2016 as Principle Investigator of the Telethon Undiagnosed Diseases Program.
In 2006 he became Full Professor of Medical Genetics at Vanvitelli University, where he acts as Head of Medical Genetics and Cardiomyology UOSID. Currently, he is also Director of the School of Specialization in Medical Genetics.
He is author of  over 215 articles published in peer reviewed journals (h=52, Scholar). One of his most significant findings is the identification of delta-sarcoglycan which causes limb-girdle muscular dystrophy and other Mendelian disorders.

Over the years he has gained clinical and genetic experience on muscular dystrophies, characterising new genes and diagnosing over 3,000 cases. In recent years, he has coordinated research projects on the gene therapy of delta-sarcoglycanopathy and on the identification and classification of novel causes of genetic myopathies through next generation sequencing (NGS). He has developed a number of specific strategies for detecting mutations in neuromuscular disorders, lysosomal storage disorders, neufibromatosis, kidney disorders, etc. Using the NGS platforms, his group has studied Italian undiagnosed cases since 2011. He is the coordinator of the Telethon “Undiagnosed Diseases Programme”, which was launched in 2016 to progress understanding on undiagnosed diseases.  So far, the programme has uncovered disease causing mutations in >240 families with unsolved genetic conditions.

Without the Telethon Institute of Genetics and Medicine, more advanced research on genetic diseases in Italy would be much more difficult and almost daunting.