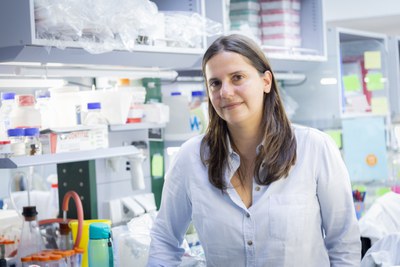 Alessia Indrieri obtained her Laurea “cum laude” in Biological Science from the University of Naples “Federico II” in 2005 and received her PhD in Molecular Medicine from the European School of Molecular Medicine (SEMM) in 2011. As a PhD student she contributed to the identification of disease genes and to the characterization of the molecular mechanisms underlying a rare Mitochondrial Disease. During her post-doctoral fellow at the TIGEM, she focused her research on the study and therapy of Mitochondrial Disorders and of mitochondrial-associated neurodegenerations. Moreover, she also focused her interest on the biology of non-coding RNA and in their application in disease therapy. In 2019, she became a tenured researcher at the Institute of Genetic and Biomedical Research (IRGB), National Research Council (CNR), Milan. In 2020, she started her independent laboratory at the TIGEM in the Molecular Therapy Program and her research group is currently working on the development of novel therapeutic approaches for mitochondrial-associated disorders.

Mitochondrial dysfunction underlies the pathogenesis of a variety of human neurodegenerative diseases (NDs), either directly, as in the case of the rare Mitochondrial Diseases (MDs), or indirectly, as in more common NDs, such as Parkinson’s diseases. In particular a tight connection between vision and mitochondrial dysfunction has been extensively described. Several MDs are associated with some form of visual impairment. In particular Leber Hereditary Optic Neuropathy (LHON) and Dominant Optic Atrophy (DOA), the most frequent mitochondrial optic neuropathies (ONs), are both characterized by degeneration of retinal ganglion cells and loss of vision. Interestingly, also the most common ONs, such as glaucoma and diabetic retinopathy also show signs of mitochondrial dysfunction and share clinical similarities with the hereditary MDs. Despite a vast amount of research these pathologies are still only treated symptomatically, and, in this respect, mitochondria could represent the common denominator and hence a promising therapeutic target. We recently demonstrated that the microRNAs miR-181a and miR-181b (miR-181a/b) regulate key genes involved in mitochondrial biogenesis function and clearance. We also show that these miRNAs are involved in the global regulation of mitochondrial turnover in the central nervous system (CNS) through the coordination of mitochondrial biogenesis and mitophagy. Interestingly miR-181a/b downregulation protects neurons from cell death and ameliorates the disease phenotype in different in vivo models of MDs, including LHON. The main interest of the lab is to develop and validate new therapeutic strategies enhancing mitochondrial turnover in the CNS to treat mitochondrial-associated neurodegeneration in a mutation-independent manner. Our strategies will be applied in models of rare diseases such as mitochondrial ONs, as well as in common disorders models such as glaucoma, Diabetic Retinopathy and Parkinson disease.

The overall goal of my research is to find effective treatments for defective mitochondrial functions. In particular we aim to develop mutation-independent strategies to treat rare and common mitochondrial-associated disorders.