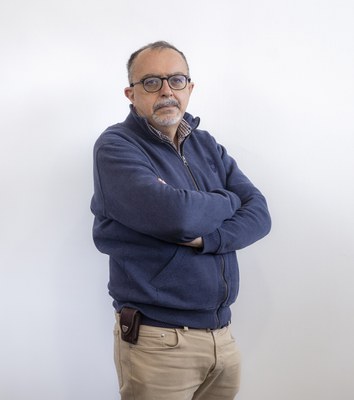 Pathophysiology of membrane channels and transporters

Luis Galietta completed his University studies in Biology in Naples, before moving to Genova in 1986 to work as a young investigator at the Gaslini Institute, one of the largest pediatric hospitals in Europe, and at the Institute of Biophysics of the CNR.  In 1991, he obtained a permanent position at the Gaslini Institute researching the molecular and functional characterization of ion transport in epithelial cells, with a special focus on the elucidation of the pathogenic mechanisms underlying cystic fibrosis lung disease and the development of possible therapeutic strategies.  From 2000 to 2003, he visited the laboratory of Prof. Alan S. Verkman at the University of California San Francisco, where he worked on the identification of pharmacological modulators of the mutant CFTR protein.  In 2016, he moved to TIGEM to start a new laboratory and continue his research.  His studies are supported by grants from Cystic Fibrosis Foundation (US), Vertex Innovation Award (VIA), Italian Cystic Fibrosis Foundation (FFC), Italian Ministry of Health, and the Million Dollar Bike Ride program.

Cystic fibrosis (CF), one of the most frequent genetic diseases, is caused by loss of function of CFTR, a membrane protein that mediates chloride and bicarbonate transport in the epithelia of different organs.  Loss of CFTR function affects multiple organs but resultant lung disease is the major cause of morbidity and mortality in CF.  The lack of CFTR impairs the innate natural defenses of the airways causing bacterial infection and mucus accumulation.

This basic defect in CF can be targeted with pharmacological strategies.  Depending on the type of mutations, CFTR activity can be restored with specific drugs called correctors and potentiators.

My research group has been particularly active in the search for effective correctors and potentiators to treat the basic defect in CF.  In collaboration with Prof. Alan S. Verkman (University of California San Francisco) we developed high-throughput methods that were subsequently used to screen large chemical libraries.  With this strategy, several active molecules were found.  High-throughput screening also allowed identification of potent and selective CFTR inhibitors (e.g. CFTRinh-172) that are important as tools of research.

I also collaborated with a research team led by Dr. Tiziano Bandiera at the Italian Institute of Technology (IIT) to find novel CFTR correctors.  The project, supported by the Italian Cystic Fibrosis Foundation (FFC), led to the discovery of the corrector ARN23765,endowed with picomolar potency.

The basic defect in CF can be potentially corrected by targeting other proteins. This is particularly important for CF patients who carry “undruggable” mutations, i.e. insensitive to potentiators and correctors.  We focus on two proteins: TMEM16A, a second type of  chloride channel, and ATP12A, a proton pump. Pharmacological activation of TMEM16A could overcome defective anion secretion in CF. While pharmacological inhibition of ATP12A could prevent the acidification that occurs in CF airways. Luis Galietta is the head of two TIGEM Units:

My research is dedicated to understanding the mechanisms underlying ion transport in epithelial cells. We use high-throughput screening techniques to identify drugs to treat cystic fibrosis by targeting membrane channels and pumps.