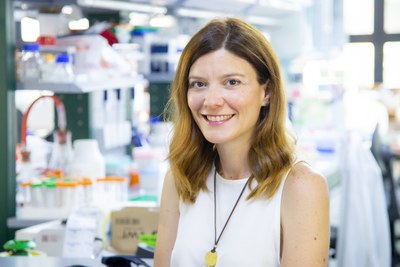 Chiara Di Malta graduated in 2005 from the University of Naples “Federico II”, under the supervision of Professor Giuseppe D’Alessio in the Department of Structural and Functional Biology. She then joined TIGEM as an Open University PhD student, in Andrea Ballabio’s laboratory. Her main PhD research project was focused on the study of the mechanisms leading to neurodegeneration in lysosomal storage disorders (LSDs), rare genetic diseases that arise due to the accumulation of undigested material inside the lysosomes. She spent over three years in the United States, working at the Baylor College of Medicine (Houston) as a visiting PhD student. During this period, she also contributed to two research projects that led to the identification of the Transcription Factor EB (TFEB), a member of the MiT/TFE family of transcription factors, as a master regulator of lysosome biogenesis and autophagy function. As a postdoctoral researcher, she studied the signaling pathways regulating lysosomal adaptation to nutrient availability and identified a novel transcriptional regulation mediated by MiT/TFE factors that control mTORC1 signaling. More recently, she showed that this mechanism promotes cystogenesis and tumor growth in Birt-Hogg-Dube’ syndrome, a genetic condition due to loss of function mutations in the gene encoding FLCN, a key player of mTORC1 signaling activation. In 2020, she was appointed as a Research Fellow at the University of Naples “Federico II” and since January 2021, she has held a position as an independent investigator at TIGEM. Her research activities are currently supported by the Kidney Cancer Association, Worldwide Cancer Research and the Telethon Foundation.


Lysosomes are the main degradative compartment of eukaryotic cells; they represent the endpoint of different endocytic pathways and of the self-catabolic process known as autophagy. Their capacity to degrade a vast array of macromolecules, thanks to an arsenal of different hydrolases, enables them to remove toxic cellular material as well as damaged organelles, shut off signal transduction pathways, and recycle macromolecules’ building blocks, in particular amino acids.  The lysosomal ability to scavenge nutrients from proteolytic degradation is particularly relevant for cancer cells, which have increased energy demands and generally must grow and proliferate in nutrient-poor microenvironments. In addition to its degradative function, the lysosome also has a crucial role in the regulation of signalling pathways that control cellular anabolism. In particular, the lysosome is the cellular hub for the nutrient-sensing signalling pathway orchestrated by the kinase complex mTORC1, master regulator of cell growth and metabolism. Mutations of different key players of this nutrient-sensing lysosomal machinery have been implicated in cancer while frequently mutated oncogenic pathways, such as the PI3K/AKT or the MAPK pathway, also result in mTORC1 hyperactivation. In addition, we recently discovered that excessive activation of MiT/TFE factors, master regulators of lysosome biogenesis and function, also promotes mTORC1 hyperactivation, which fuels the growth of different malignancies, in particular kidney cancer.

In our lab, we are interested in dissecting how lysosomal dysfunction and, in particular, mTORC1 signalling deregulation may contribute to the pathogenesis of different genetic disorders characterized by kidney cystogenesis and cancer. Although kidney cysts and tumours represent distinct pathological conditions, common pathways could underline both diseases and we hypothesize that lysosomal dysfunction is highly implicated in these renal manifestations; hence targeting the lysosome may represent a potent therapeutic strategy.

In the lab we combine mouse genetics and cell biological tools, specifically biochemistry, immuno-fluorescence imaging, proteomics and transcriptomics in cellular and murine models, aiming to identify novel molecular targets for the treatment of kidney cystogenesis and cancer. We intend to dissect how lysosomal dysfunction contributes to kidney cystogenesis and cancer in order to open up new therapeutic avenues for the treatment of these conditions. At TIGEM, we can pursue these goals supported by high-quality resources and facilities, in an international and extremely stimulating environment.