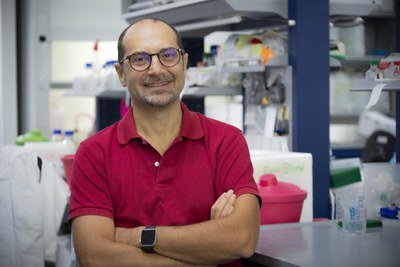 Diego di Bernardo received his "Laurea cum laude" in Electronic Engineering in 1997 from the University of Naples "Federico II". In 2001, thanks to a 3-year European Commission “Marie Curie” Fellowship, he was awarded a PhD in Medical Physics from the University of Newcastle School of Medicine, UK (lab of Prof. Alan Murray). He was a postdoctoral researcher first at the Wellcome Trust Sanger Center in Cambridge (UK) with Dr. Tim Hubbard and then in the laboratory of Prof. Jim Collins at Boston University, USA. In 2003, he became a Principal Investigator at TIGEM, where he also acts as Coordinator of the Genomic Medicine Program and Supervisor of the Bioinformatics Core. In 2007, he became Assistant Professor in Biomedical Engineering at the University of Naples "Federico II" and in 2015 Associate Professor. His research interests are strongly cross-disciplinary, blending Biomedical and Control Engineering with Molecular and Cell Biology. His lab has developed integrated experimental and computational approaches to reverse engineer gene networks and for computational drug repositioning. He is also one of the pioneers of Biomolecular Control, which integrates Synthetic Biology with Control Engineering. He is the author of over 100 publications in international scientific journals. His research has been funded by Telethon, AIRC, Italian Ministries of Research and Health, HFSP, and by the European Union.


Our lab develops and applies innovative technologies integrating experimental and computational approaches to study and engineer living organisms with the aim of advancing therapies for rare and common disorders. One of the main tools in our research is microfluidics, a technique that allows cell probing in real-time and precise measuring of individual cell response over time thus enabling quantitative observation and mathematical modelling of biological processes. The lab has exploited this platform to achieve precise temporal control of transcriptional and signalling pathways in yeast and mammalian cells. We are currently using it to gain novel understanding on how the stress response in mammalian cells is regulated and how it could be re-engineered to yield super-producer cell lines capable of speeding up the production of biological drugs and viral vectors for gene therapy while reducing costs.

Our lab has also pioneered the concept of using transcriptional responses to drug treatments in cells and tissues to reposition drugs for the therapy of rare genetic disorders and common diseases. We are now extending this approach to the use of single-cell transcriptomics in cancer to identify drug combinations to prevent development of drug resistance. Diego di Bernardo is the Head of the Bioinformatics Facility, supporting TIGEM’s research community in addressing a wide variety of biological questions from genomics to transcriptomics using state-of-the-art computational approaches.

I am a Biomedical Engineer by training and I believe that cross-disciplinary research blending Engineering with Molecular and Cell Biology will greatly advance our understanding of rare and complex diseases and how to treat them.