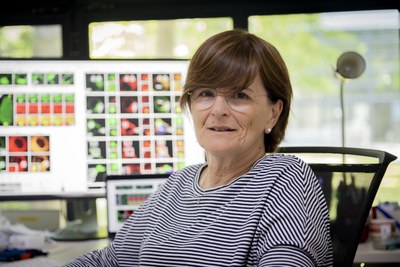 Antonella De Matteis completed her studies in Biology at the University of L’Aquila. In 1988 she co-founded the Consorzio Mario Negri Sud Research Institute, a research center with the aim of training researchers in the South of Italy, where she also was a researcher at the Laboratory of Neuroendocrinology. In 1992, she became Head of the Secretion Physiopathology Lab at CMN Sud. In 2009, she moved to TIGEM to start a new laboratory and continue her research. Since 2011, she has been Director of the Cell Biology Program at TIGEM. In 2016, she was awarded an ERC Advanced Grant (Systems Biology of Membrane Trafficking - SYSMET). She is currently Full Professor of Biology at the Federico II University of Naples, and a Faculty Member of both the European School of Molecular Medicine (SEMM) and of the Open University PhD Programme in Human Genetics. For the past 5 years, she has been invited as plenary/keynote lecturer in over 30 different prestigious meetings and advanced schools both in Europe and in the USA.

The molecular mechanisms behind membrane trafficking

Membrane contact sites (MCSs) are areas of close apposition between the membranes of two organelles. MCSs most frequently involve the endoplasmic reticulum (ER) and another organelle such as mitochondria or the Golgi. Recently, we established a new FRET approach that has enabled us to identify molecular determinants coupling lipid exchange and cargo exit with maintenance of ER-Golgi MCSs. In so doing we identified not only tethering proteins such as VAPs and ORP10 but also that FAPP1 regulates PI4P levels at ER-Golgi MCSs and influences the levels of specific secreted proteins such as ApoB100.
One of our group’s missions is to apply our knowledge of membrane trafficking to understand the cellular and molecular pathogenesis of Mendelian disorders that arise from defects in membrane trafficking machinery, as well as identifying candidate drug targets. Oculocerebrorenal syndrome of Lowe (OCRL), or Lowe syndrome, is a rare X-linked genetic disease caused by mutations in the ocrl1 gene that is characterized by congenital cataracts, renal Fanconi’s syndrome (low molecular weight proteinuria, tubular acidosis) and mental retardation. OCRL1 is a PI(4,5)P2 5-phosphatase, and we have shown that its activity is required for different trafficking pathways that intersect early endosomes, including that of megalin, which controls protein reabsorption in proximal tubular cells at the kidney. Non-functional OCRL causes deregulation of actin assembly and the accumulation of PI(4,5)P2 at early endosomes which inhibits autophagosome-lysosome fusion. We have screened small molecule libraries looking for correctors of the cell phenotypes induced by the loss of OCRL and we are currently testing these correctors in mouse models for Lowe syndrome.

Amyotrophic lateral sclerosis 8 (ALS8) belongs to a heterogeneous group of progressive neurodegenerative disorders characterized by the death of motor neurons. ALS8 is caused by mutations in VAPB, a protein that acts at multiple contact sites, including ER-Golgi MCSs. We found that a depletion of VAPB results in an increase in Golgi- and acidic vesicle-localized PI4P associated with reduced neurite extension in a differentiated motor neuron cell line, which can be rescued by depleting PI4P levels.

Viral replication/propagation and membrane trafficking. SARS-CoV-2 and other coronaviruses share common mechanisms to extensively rearrange cellular membranes into replication organelles for RNA synthesis, and viral RNA and proteins subsequently assemble virions that follow the secretory pathway for cellular exit. We are using our longstanding experience in the membrane trafficking field to understand the mechanisms underlying these phenomena and to identify potential leads for broad antiviral agents. My work has focused on the molecular mechanisms controlling intracellular membrane trafficking, a process that is crucial for the maintenance of cell organization, organelle homeostasis, and for intercellular communication. In recent years, our research has aimed to develop therapeutic strategies to cure inherited diseases.