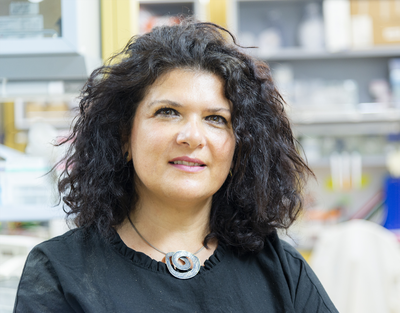 Elvira De Leonibus graduated in Developmental Psychology and did her PhD in Psychobiology and Psychopharmacology at “La Sapienza”, Rome. She then moved to the Catholic University of Nijmegen (The Netherlands) for a post-doctoral position. Her main research interest has been the neurobiology of learning and memory in normal and pathological conditions. In 2007, she joined the TIGEM with a semi-independent research appointment to contribute her expertise in pre-clinical research to the discovery of novel genetic and pharmacological therapeutic approaches for human genetic disorders. Since 2010, she has held a full appointment as Group Leader of the Neuropsychopharmacology lab at National Research Council (CNR). From 2014, this role has been held with a joint appointment as a member of the TIGEM Faculty.

Neurodegenerative disorders are characterized by progressive neuropathological processes that can last decades before a conspicuous loss of neurons can be detected. Therefore, there is a large therapeutic window to find early subtle behavioural and cognitive symptoms that allow early diagnosis and the discovery of the disease mechanisms leading to neuronal loss. Our group is interested in the identification of these early behavioural and synaptic alterations, through sensitive behavioural tasks for rodents. Using a top-down approach we move from the behavioural defects to the neuronal, biochemical and molecular mechanisms which underlie them, to finally targeting these defects with small molecules and provide proof-of concept pre-clinical evidence of their therapeutic efficacy. Using this top-down research strategy, we are working on:

The neurobiology of memory capacity

We are currently investigating a little-explored aspect of memory processes, which is the neurobiology of memory load capacity, i.e., the number of items that a subject can remember for a short time interval, in normal and pathological conditions. We have developed novel behavioural tasks to study MC in rodents and demonstrated that mice have a limited MC of about 6 objects and that high memory load processing requires post-translational modification of glutamate receptors in the hippocampus. We recently showed that MC is impaired in early ageing and can be rescued by autophagy enhancers. Through a combination of behavioural, genetic, pharmacological and molecular approaches we are providing novel insights into (i) the role of specific brain regions and dopamine-regulated molecular pathways in supporting memory load capacity, (ii) disease mechanisms leading to memory capacity dysfunctions in schizophrenia and neurodegenerative disorders and (iii) sex-differences in memory capacity. Elvira De Leonibus is the Head of the Behavioral Core Facility, aiming at identifying abnormal behaviors in animal models that may be associated with gene deletions or mutations pertaining to our human genetic diseases of interest

My group aims to identify early behavioural and disease mechanisms in animal models of complex human disorders, with the ultimate goal of discovering and testing novel therapeutic strategies to manage them.