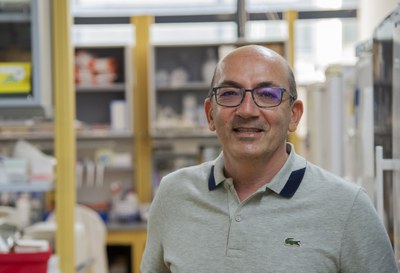 Ivan Conte graduated in 1999, with a degree in Biology from University of Naples “Federico II”. In 2004, he completed his Ph.D. studies on the molecular mechanisms underlying inherited retinal dystrophies in the laboratory of Prof. A. Ciccodicola also at the University of Naples. To broaden his interest in the visual system, he moved to the Institute of Neurobiology “Ramon y Cajal” in Madrid (Spain), working as a postdoc in the laboratory of Prof. P. Bovolenta, where he studied the development of retinal cells and mechanism behind retinal disease. In 2007, he moved to the laboratory of Prof. Banfi at TIGEM and was honoured for scientific achievements in Neurobiology by the President of the Italian Republic. Since 2012, he has directed his own laboratory in TIGEM. From 2019, he has held the position of Assistant Professor of Molecular Biology at University of Naples “Federico II”.

Cell clearance, including autophagy and ubiquitin proteasome pathways, is the homeostatic process by which damaged proteins and organelles are cleared from the cells. Proof-of-concept studies are providing sound evidence for the use of autophagy inducers as therapeutic tools. These act by reducing pathological accumulation of protein-aggregates in different neurodegenerative disorders; this aggregation, if left untreated is toxic and reduces neuronal cell lifespan.

Our lab uses cellular and animal models to elucidate the physiological roles of autophagy and how its dysfunction may affect RPE/photoreceptor crosstalk in retinal diseases. Inherited retinal dystrophies (IRD) are the most common genetic disorders affecting the eye. They include, among others, Retinitis Pigmentosa, one of the leading causes of inherited blindness, whose incidence is about 1:4,000. These diseases, for which there are currently few disease-modifying therapies, show highly diverse and heterogenous clinical phenotypes; patients may develop visual loss in early childhood, whereas others may remain asymptomatic until mid-adulthood. However, they share a common pathological hallmark, death of rod cells, resulting in the development of night blindness with visual field restrictions, accompanied by subsequent loss of cone cells leading to a complete loss of visual fields. Recent advances have pointed out the role of mistrafficking and accumulation of mutated and unfolded proteins in impairing normal cellular function and inducing toxicity in both photoreceptor and retinal pigment epithelial cells.

Our goal is to identify new therapeutic strategies that enhance autophagy to alleviate pathological protein accumulation and re-establish normal degradation in a mutational independent manner to treat IRD.

Ivan Conte is the Head of the Medaka Fish Facility, which allows researchers to take advantage of the unique features of the medaka model system, provides advice on feasibility, help with experimental design, and ongoing support over the course of the project.

My research aims to elucidate the roles of miRNAs in cell clearance and how their dysfunction may affect RPE/photoreceptor crosstalk. Our goal is to identify molecules that enhance clearance of retinal toxic aggregates to treat eye disorders.