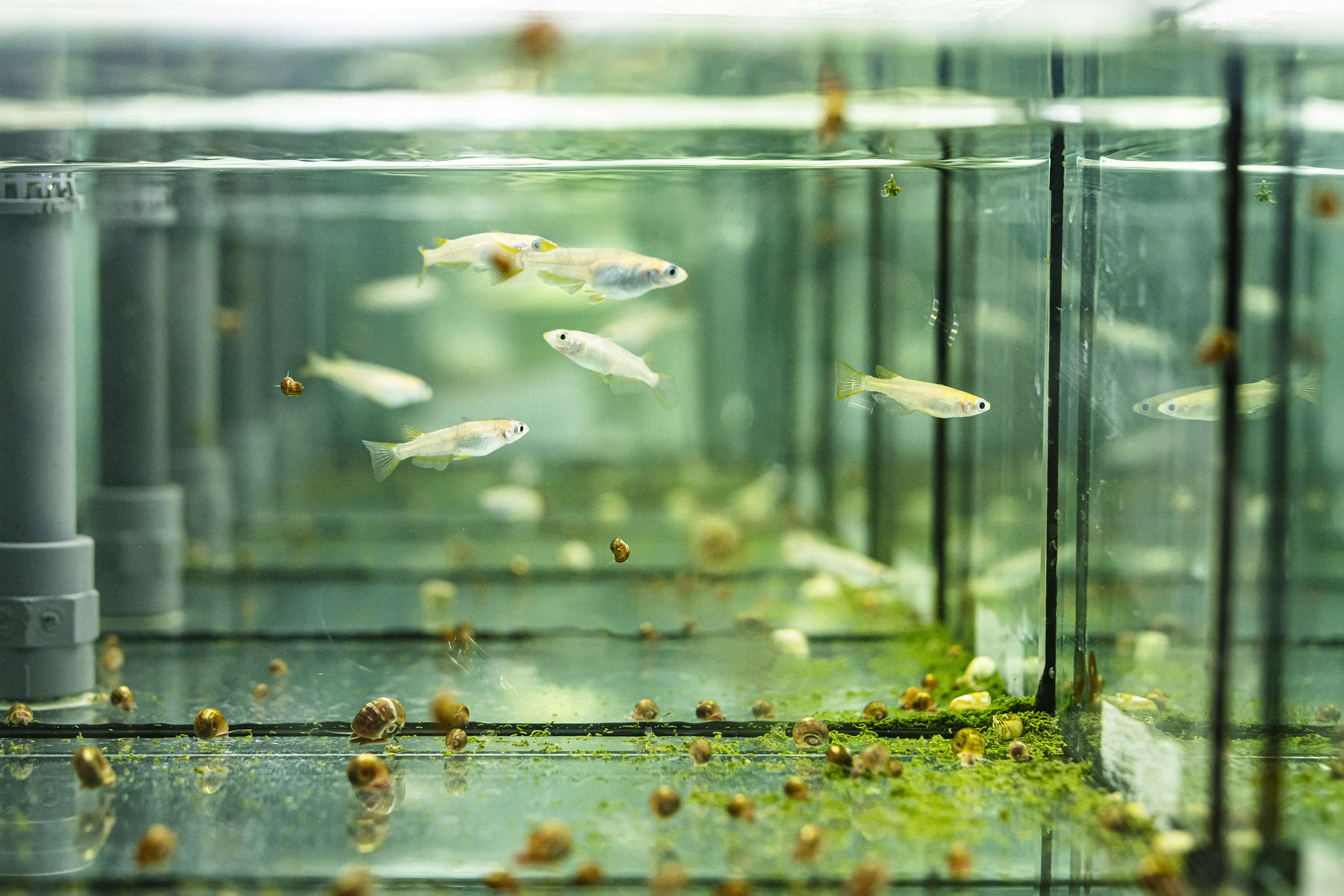 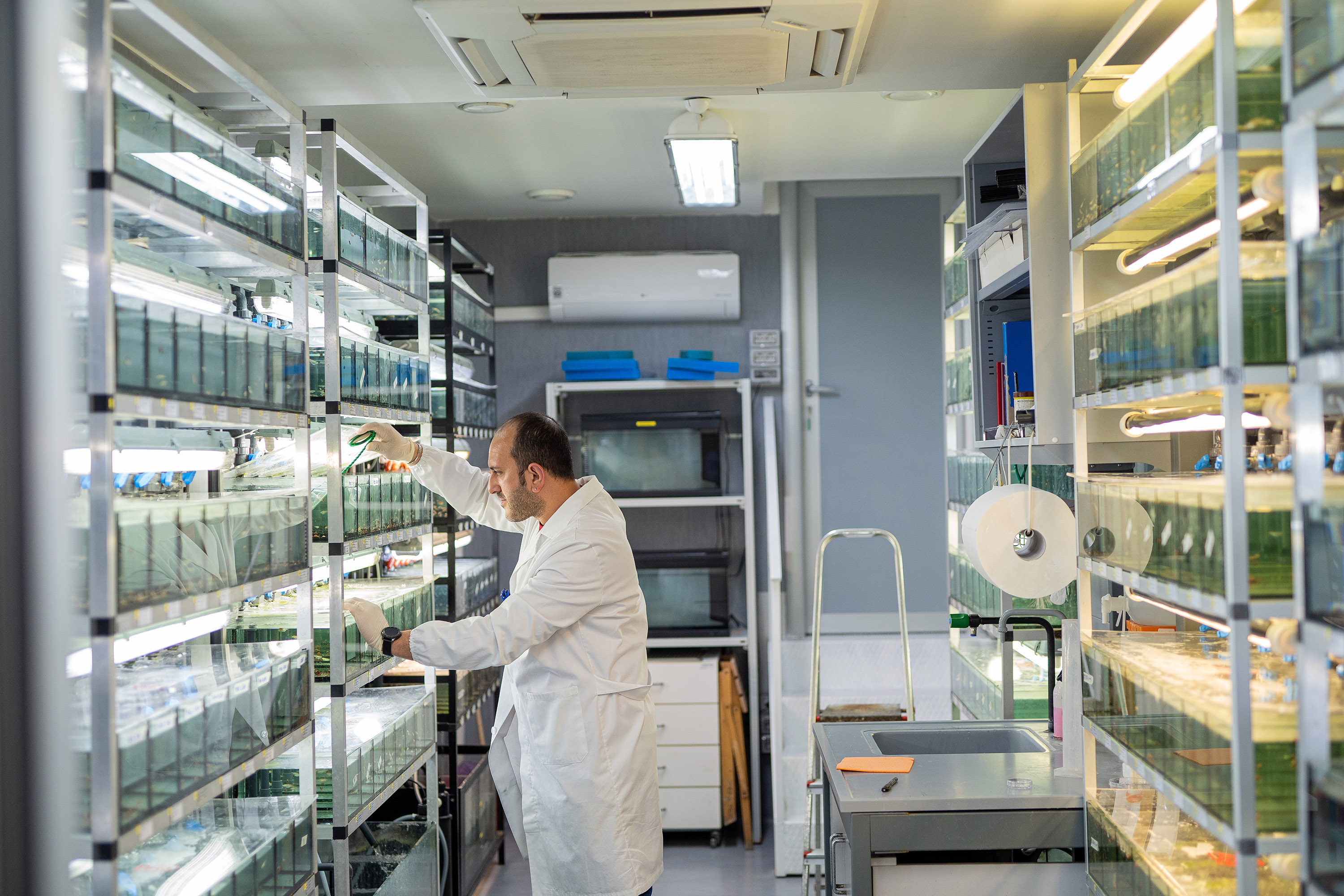 In recent years, the Medaka fish (Oryzias latipes) has gained popularity as a laboratory specimen in various fields of biology, especially in developmental biology, chemical screening, and genetic studies. Its relatively short life cycle, capacity to reproduce quickly, and ease of breeding are chiefly responsible for its popularity in these fields. The optical clarity of medaka embryos and larvae make it possible to capture real-time images of developing pathologies and monitor drug efficacy. Such images can be enhanced in fluorophore expressing transgenic strains. From a clinical perspective, medaka experiments are practical because they allow for the identification of new therapeutic compounds, and thus improvements in drug discovery. Chemical genetics is conceptually simple: medaka embryos or larvae are arrayed into 96-well microtitre plates, and small-molecules are robotically dispensed into the raising media.

Exploiting the favorable characteristics of the medaka fish model has proven to be a useful means of testing hypotheses regarding gene function, making the medaka a very economical and powerful model system for the study of a wide variety of human diseases. Reliable genomic resources on medaka fish are also available, including a high-quality genome sequence (accessible at http://genome.ucsc.edu/), which has revealed that the medaka exhibits reduced genomic duplication compared to other common fish model organisms (e.g., zebrafish).

The Medaka Facility includes seven aquarium systems, as well as a stand-alone quarantine unit. Currently, 8000 fish from different wild type, knock-out and transgenic medaka lines are being kept in 252 aquariums. In addition to the Animal House for Medaka fish, which is a restricted area, our Medaka Core Facility has another designated laboratory, adjacent to the aquarium facility, which is fully equipped and available for all users to perform standard fish work. The laboratory is also equipped with incubators, stereomicroscopes and injectors suitable for injection and maintenance of medaka embryos.

Furthermore, our Medaka Core Facility occupies laboratory space in the HCS Facility and is fully equipped and dedicated to drug screening experiments. The Medaka Facility makes use of an automated confocal microscope High Content Imaging System (Leica HSI) to fulfill this objective.

The Medaka Core Facility has been fully operational since 2007 and currently supports all researchers at the TIGEM Institute. In addition to providing support to TIGEM researchers, the facility also conducts research with the goal of defining the molecular networks that control eye development and function. Because many genes and their functions are strongly conserved through evolution, we can study how both coding and non-coding genes interact using our cutting-edge experimental approaches, including Next Generation Sequence (NGS), CRISPR/Cas-Mediated Genome Engineering and molecular biology, on a variety of model organisms such as mice and medaka fish. More specifically, we are examining how miRNAs, secreted molecules and transcription factors contribute to eye morphogenesis and function, including how they regulate RPE-photoreceptor cells cross-talk and retina ganglion cell axonogenesis. We have identified several miRNAs that, when mutated, lead to specific developmental eye abnormalities. Not surprisingly, by conducting parallel experiments in both mice and medaka fish, we show how these networks are evolutionary conserved between mammals and fish, stressing the biological importance of these pathways. The ways in which different eye structures are regulated may also help us to pinpoint the novel pathogenetic mechanisms underlying ocular pathological conditions. Ultimately such findings will open up new avenues for specific molecular diagnosis and therapeutic treatments.